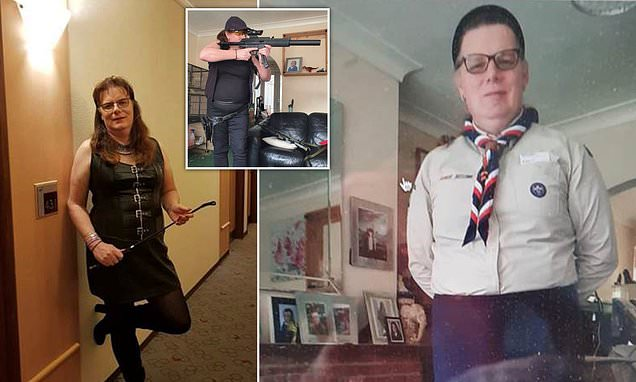 Bus driver Monica Sulley, 58, reportedly became a guiding Commissioner (right) in July this year, overseeing Rainbows, Brownies, Guides and Rangers in Southwell, Nottinghamshire. Her appointment has upset some feminist campaigners who argue that biological males identifying as women should not be given leadership roles in the movement. Campaigners delved into her background and unearthed a picture on her Instagram page showing her in a black bondage-style short dress with high heels and wielding a whip (left). Another snap showed Ms Sulley dressed in a tight fitting black top and taking aim with what appears to be a fake assault rifle with a holstered handgun hanging from her waist (inset). Girlguiding which is Britain's leading charity for girls and young women launched its investigation after the pictures of Ms Sulley were revealed by the feminist website 4W.