Eat Out To Help Out.

HAYSIE Member Posts: 12,492
October 9 in The Rail
£250k Eat out to Help out scam exposed: How the Lamborghini-driving boss of a huge Papa John's pizza franchise got a slice of YOUR cash, even though it offered mostly takeaway 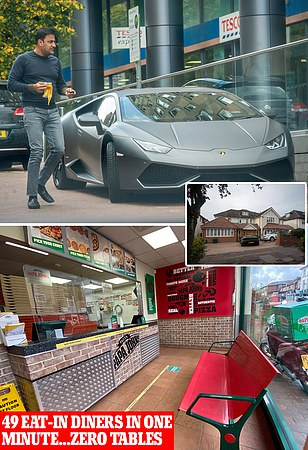 Millionaire Raheel Choudhary (top) is suspected of stealing more than £250,000 of taxpayers' cash by claiming fake Eat Out to Help Out meals - despite the fact most of his restaurants were not even eligible for the offer. Choudhary, who lives in a £1.6million home in north east London (inset) and drives a Lamborghini, is the pizza giant's largest UK franchisee, operating 61 restaurants, including in Tunbridge Wells (bottom) and West Norwood. Last night, fraud experts warned the suspected scam was the 'tip of the iceberg', and highlighted how easily Government coronavirus schemes could be exploited, costing taxpayers billions of pounds. Mr Choudhary promised his managers bonuses for putting in large numbers of the fake orders. Workers who objected said they were threatened with the sack or fewer hours.