HAYSIE Member Posts: 12,519
June 16 in The Rail
The above topic has been discussed on a number of threads, and probably warrants a dedicated thread.

The George Floyd murder was despicable.
The officer responsible is clearly evil.
I was horrified as he appeared to shift his weight to increase the pain he was inflicting on his victim.
I think the authorities may have lessened the reaction by immediately charging those involved.
Was there really any doubt that charges should follow?
The USA seem slow to learn any lessons.
Other examples are too common to list.
It only took a couple of days for another victim to emerge.

I think that racism is more about hearts and minds, than legislation.
Legislation may well curtail overt racism, but does nothing to change peoples mindset.

I was just reading the latest John Grisham book in which he points out that anti-segregation legislation has merely meant the removal of signs, and that it still exists, where black people are unwelcome in white bars and vice versa.
So the legislation has outlawed overt racism, but not the existence of it.

During my lifetime "No Blacks, No Irish, No Dogs." signs were commonly displayed in guest houses, in this country.
The legislation making these signs illegal will have done nothing to alter the mindset of the proprietors.
Excuses can easily be found to avoid letting rooms to those that they may wish to discourage.

Legislation prohibiting manufacturers from displaying gollys on jam jars, or reviewing rice crispy boxes will have done little to further the cause.

I think some areas are difficult.
Many people that consider themselves patriotic feel that they deserve preferential treatment compared to an immigrant.
In the same way that someone who has worked for a company for 40 years should receive more rights than someone that has worked there for 5 minutes.

Many thousands of people that are anti-immigration, and racist will have ironically have had their lives saved by those they object to that are working in the NHS. 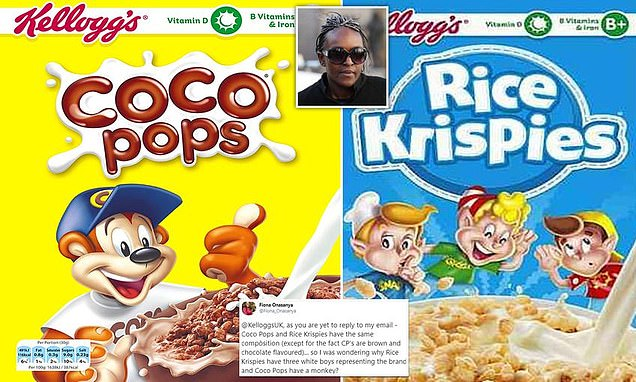 Coco Pops' trademark monkey mascot has come under suspicion from disgraced former Labour MP Fiona Onasanya (pictured left). Ms Onasanya, who was jailed for three months in January 2019 after she was convicted of lying to police about a speeding ticket, says that there is little difference between Coco Pops and sister cereal brand Rice Krispies beyond their colour and flavour. The former Peterborough MP revealed she has emailed Kellogg's UK office for clarification on why Rice Krispies have 'three white boys' as a mascot whereas chocolate-flavoured Coco Pops is represented by a monkey. Pictured right: The Coco Pops mascot on the front of a box. Inset: Ms Onasanya's tweet.